OMR, ACLU, and EFF oppose the expansion of the Patriot Act.

?The right of the people to be secure in their persons, houses, papers, and effects, against unreasonable searches and seizures, shall not be violated, and no warrants shall issue, but upon probable cause, supported by oath or affirmation, and particularly describing the place to be searched, and the persons or things to be seized.?

The 4th amendment is based on Based in 17th C. British law from the landmark case of Entick v. Carrington. One of a series of civil actions against state officers who, pursuant to general warrants, had raided many homes and other places in search of materials connected with John Wilkes' polemical pamphlets attacking not only governmental policies but the King himself.

Entick, an associate of Wilkes, sued because agents had forcibly broken into his house, broken into locked desks and boxes, and seized many printed charts, pamphlets and the like. In an opinion sweeping in terms, the court declared the warrant and the behavior it authorized subversive ''of all the comforts of society,'' and the issuance of a warrant for the seizure of all of a person's papers rather than only those alleged to be criminal in nature ''contrary to the genius of the law of England.'' Besides its general character, said the court, the warrant was bad because it was not issued on a showing of probable cause and no record was required to be made of what had been seized. Entick v. Carrington, the Supreme Court has said, is a ''great judgment,'' ''one of the landmarks of English liberty,'' ''one of the permanent monuments of the British Constitution,'' and a guide to an understanding of what the Framers meant in writing the Fourth Amendment.

All well and good, but what can we do about it?

How to:
1. Call Congress today. To look up your Representative's and Senators' direct numbers click here, or you can call the Capitol Switchboard at (202) 224-3121.
2. Send a letter like this one from the ACLU (link )

People across the country have made clear their opposition to the Patriot Act. Hundreds of communities have passed resolutions against the Patriot Act and held town hall meetings to discuss its impact on their residents and our Constitution. Congress should not be tone-deaf to these serious concerns.

There are significant flaws in the Patriot Act, flaws that threaten our fundamental freedoms by giving the government the power to access to medical records, tax records, information about the books we buy or borrow without probable cause, and the power to break into our homes and conduct secret searches without telling us for weeks, months, or indefinitely.

Finally, I believe that the PATRIOT Act is an attack on fundamental American values and that it needs to be fixed. The Constitution and its Bill of Rights emphasize the need for checks and balances on government agents and limits to their power. I understand that the PATRIOT Act rolled back key judicial oversight and gave law enforcement significant new powers that go beyond the war on terrorism. Reforming this legislation would be an important step in bringing the PATRIOT Act back in line with American values.

Once again, I strongly urge you to oppose expansion of the PATRIOT Act.

I look forward to hearing your thoughts on this very important matter.

We must stop this tyranny NOW!

One Man Revolution is returning to our roots! Liberal stumping at its best from the card-carrying ACLU member and breakthrough podcaster, The Revolutionary – Dan Novatnak.

Upcoming episodes will include:
> Interviews with Authors from both the left and right
> Hard hitting investigations into our government and big businesses in action (or inaction)
> Insane conspiracy theories (either debunking or proposing)
> The best unsigned artists

Also look for new shows as part of our growing network of all-star podcasters!

Since Wednesday is the beginning of the month of June, please go vote for One Man Revolution on Podcast Alley and Podcast Pickle !

Now, back to your regular scheduled programming.

If you were one of the individuals that joined us at the Aloma Cinema Grill, thank you. If not, You missed a great event! Much fun was had by all and the amount of prizes awarded was unprecidented.

If you want to be kept informed about upcomming events please Contact Us to get in on the fun free movies, events, and other deals we announce on our Podcasts.

To subscribe to One Man Revolution, simply point an RSS reader to http://feeds.feedburner.com/TheRevolution and you will get up to the minute information.

Dan and Joey talk to Matthew Stover, author of Star Wars: Revenge of the Sith. The novelization of the soon to be released movie of the same title. A must read for any Star Wars fan.

Star” target=”_blank” >Get the book! at the One Man Revolution Store 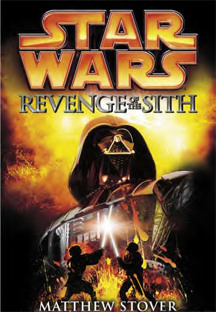 Author of Star Wars Episode III: Revenge of the Sith, will join the Revolution. Very excited! Live via telephone just in time for the movie release!

Get those podcatchers ready!

Live from the back deck at Piney Point Studios

RANT:
Why do we rebuild our enemy?s countries?
Tourists and Ron Jeremy
British Embassy Bombings and the UN
Puerto Rican Women

6 and a Half Days with Joey Cruz

Joey is a very lucky man! He was one of the privileged few in the press that saw the movie a full two weeks ahead of release. He gives his impressions about the new Lucas release.

12:00(midnight) May 19: Star Wars Ticket Give Away Information

House of Wax Premiere and Review

Show Notes:
House of Wax (Dan ***, Joey [Go see it!]) review
12:00am May 19 Star Wars Ticket Give Away Information
Interviews on the horizion
Dating Jerks

Vote for this podcast at Podcast Alley

Thanks for your attendence!

The House of Wax event was a great success! The cheers when Paris got whacked were the loudest of all! I was pleasantly surprised by the movie and would recommend it to anyone who likes suspense/horror genre movies. I am a tough sell, but it did the original justice, Vincent would be proud!

If you are on this site because you attended the event, welcome! You have taken the first steps to adopting a new concept in entertainment media.
Click here for general information about the podcasting concept.

Look below for the archive of previous shows, click the links and listen right in your browser. If you like what you hear, download a podcatcher to your system and subscribe to the podcast.

Saturday, April 30, 2005, 11:22 AM
OK folks…I'm big enough to admit when something sucks! Although the content was great, the last podcast really sucked! I blame overpreparation.

Please support the active revolts and when Monday comes I promise better.